Amber Coyle has a passion for comedy which led her to train at the prestigious Groundlings, iO West, Upright Citizens Brigade, and The Nerdist. She has written her own stand-up routines and has performed in sketch comedy and improv troupes as well as several YouTube videos. Amber was born and raised in Houston, TX where she was voted “Class Clown” her senior year in High School. She earned a degree in Interior Design in Miami, where her modeling and acting career began. Amber loves to make people laugh and loves animals, especially cats! Amber has worked across the board from fashion & print modeling, national commercials, theater, TV & film, to a Marilyn Monroe lookalike. You may have seen her as the girlfriend of the world’s best tennis player, Roger Federer, in a comedic Mercedes Benz commercial. Amber starred in the Buzzfeed Motion Pictures comedy series, “Up For Adoption”, playing a mother of two teenagers. Coyle has also worked on screen as Cassie, Megan Fox’s friend, in FOX’s “New Girl”. One of her career highlights was getting to work alongside the great comedy legend, John Witherspoon, on the season 3 finale of “Black Jesus” as Bambi. Amber has a free-spirited personality and loves to make people laugh. She is a colorful and witty individual with a sweet & southern charisma. Coyle has a wide range of talent, is very easy to work with, and takes direction well. Comedy is her niche and she enjoys creating stories, developing characters, and writing comedy scripts. She’s inspired by the genius of Paul Reubens, Betty White, Chris Farley, and Martin Lawrence. 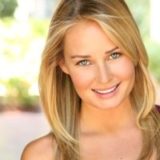