I knew I wanted to model at a young age. I used to flip through the pages of my mothers VS catalogs and I would think to myself… “I want to be that girl”. I didn’t have a clue how to get started but at 14 years old I was scouted in Chicago by the New York Agency, ID Model Management. ID Models wanted to send me to Japan to begin my career, unfortunately my parents said, “Absolutely, NOT.” So, I had to wait two years until another contract opportunity would present itself. My grandfather always said I had “MOXIE”, as I told my parents if they said, “no” this time I would leave for the Big Apple anyway and live out of my car on the streets of New York City. Thankfully, my parents gave their blessing and at the age of 16 my life changed rather quickly. I signed with my first modeling agency and made the big move to New York to pursue my dream career as a fashion model.

Over the years I have been fortunate to have worked with some of the most influential names in the fashion industry like Patrick Demarchelier, John Russo, Michael Schwartz, Hung Van Ngo, and Harry Josh. I am grateful for the opportunities I have had as a model and ambassador worldwide for brands and publications including Vogue, Sports Illustrated, Bebe, GQ, Esquire, Saint Laurent (while it was still Yves), Ferragamo, Wet N’ Wild Cosmetics, Seventeen Magazine, and more. I have held contracts in countries like Germany, China, Greece, Mexico, the U.K., and of course the USA.

In the 2010’s, I became the face of the John Frieda Go Blonder Campaign with Karolina Kurkova where I worked with Harry Josh and Hung Van Ngo.

It has been incredible to come from such a small little farm town in Indiana to traveling the world doing what I have always dreamed of. Words cannot express my gratitude for the opportunities I have had.

Shortly after signing my first contract as a teen, I entered a local beauty competition that led to capturing the national title of Teen Model of the USA, for the World Beauty Organization (WBO). At the internationally televised competition Teen Model of the World, I competed against top models from around the globe. Out of 52 countries vying to be named the most beautiful woman in the world, I placed 2nd. In 2008, I was crowned Miss Indiana USA, for the Miss Universe Organization (MUO) placing 7th at Miss USA. This is where I began my work with President Obama and Hillary Clinton.

As a successful international model and actress, Brittany launched the BE MOXIE blog, where she shares her love of travel, beauty, and fashion.

You may have seen Brittany on an episode of Two and a Half Men, in an issue of Vogue, or perhaps walking the runways at New York Fashion Week. She is a regular on Ireland AM & XPOSE’s Fashion Segments. Brittany has worked in advertising,

marketing, and her extensive work in the fashion industry peaked her interest in design and production. Her accreditations include International Business at Ball State University, Fashion Law at Fordham Law School, Film Production at Pulse College, and Fashion Design at the Dublin Institute of Design.

Brittany specifically enjoys collaborating with brands to produce original content. Her first directorial debut was for Prostate Cancer Awareness, the video broke more than 13 million views in one month on Youtube.

During her free time, Brittany runs a charitable cause that she founded, iampossible (#IAMP). IAMP encourages teens to live to their fullest as young role models. IAMP also gives away student grants by raising funds through fashion. Find out more and shop at iampossible.us

Brittany hopes to inspire readers to live their full potential. As she calls it, “BE MOXIE”. 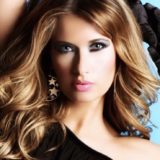