Sierra Nowak started her modeling career at just the age of 8 years old, and began acting in theater at the age of 11. She continued to participate in choir and drama club throughout high school and later moved to Los Angeles, California to pursue her career in modeling and acting, while also receiving her Bachelor of Science degree from The University of Southern California where she studied business (Marshall) and cinematic arts (SCA).

Sierra has appeared in several films, television shows and commercials including playing Marvin, a confident attorney in the film Unintended, Karen, a college freshman in the film Burgers, and Jenny, an intelligent high school student, in the Moonlighting pilot reboot. Sierra is most known for her appearance in the web series “Blue Laces,” where she plays Dr. McKenzie.

In addition, you may have seen her in commercials for Nike, AT&T or Delta Airlines, in print campaigns for Pearlosophy Skincare, Cabana Anna Swimwear and VGiCi, and in music videos such as “Boo’d Up” by Ella Mai, “Taste” by Tyga, or “Push It On Me” by Kevin Hart and Trey Songz. Sierra has also been featured in various magazines including Maxim France, LA Fashion Magazine and CWEN Magazine. 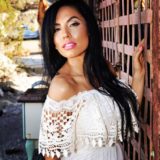